Today there is an ever growing demand for batteries around the world.

Due to the rapid development of the industry, the application of batteries in solar energy storage, peak shaving, demand response, portable power, RV, caravan, transportation, communication, power, military, aviation, marine, commercial facilities as well as in the daily needs of our clients has become more extensive on other battery options better than standard lead acid batteries.

The performance of conventional lead acid based batteries is less than optimal for peoples needs today.

Because of its inherent internal makeup and construction, traditional lead-acid batteries suffer from plate sulphation, active material loss, high water loss rate, poor low temperature performance, short life cycle, poor safety during transporting and other such flaws. In order to overcome these inherent weaknesses in lead-acid batteries, gel electrolyte has been used as a replacement in gel technology batteries. Although it reduces acid mist, reduces water loss rate, self-discharge rate and improves the discharge performance, it also introduces other new problems such as poor penetration of the gel material, weak compatibility with the internal AGM separator (between plates) and a slow reaction to the electrodes (slower response time during heavy charge / discharge events) and also increased heat buildup during high current usage.

By way of its different technology Solar Lead-Crystal batteries have a high performance & some unique characteristics.

The unique technology found in Solar Lead-Crystal batteries uses a special advanced technology formula, a new type of Crystalline Silicon Dioxide based electrolyte developed to completely replace the traditional lead acid / AGM battery internal solution. This in turn improves the product application safety & performance. When the composite electrolyte reacts with the plates during the charging process, crystalline electrolyte salts are formed, and the electrolyte is absorbed into the formula. The electrolyte is distributed evenly so there is no increased concentrations in the upper or lower parts of the plates. The electrical properties of the battery are consistent and in turn achieve reliable performance as a result of the more even surface distribution. It effectively overcomes many issues related to plate sulphation, active material loss, water loss and in turn has good low temperature performance and greatly improves product life as a result.

Some of the Solar Lead-Crystal Battery Technology Advantages summarized below:

Compared to mainstream rechargeable industrial batteries like lead acid, lead gel and AGM batteries, Solar Lead-Crystal batteries perform as follows:
• They can be charged and discharged faster without causing damage
• They can be charged below 0 degrees Celsius without causing damage
• They can be stored for 1.5 years without needing top-up charging
• They can be discharged deeper (even to below 10 Volts for a 12v battery !)
• They require no special ventilation or cooling
• They have a very low amount of gassing
• They can be used in a partial state of charge frequently without issues
• They hold no cadmium, no antimony and less than 5 percent sulfuric acid
• They have a wide operating temperature range from -5 to +55 Degrees Celsius
• They can be cycled more often to a greater depth (1400 @ 80% DOD)

Solar Lead-Crystal Technology batteries are a range of new products that were successfully developed based on existing AGM battery style principals (but designed to be much better and do away with many traditional weaknesses with that existing old technology). They has better performance characteristics compared to a conventional batteries and is the result of new technical being applied to give further advantages and extend battery life. The inherent traditional issues of serious lead acid battery acid pollution, electrode sulphation, low life, short battery cycle, poor low temperature performance and other flaws are finally resolved which in turn gives users another option for "efficient, safety and long-life Solar Storage batteries suitable for a wide variety of applications". Battery Capacity vary under certain discharge conditions in terms of how much energy can be released relative to the current draw.  The amount of current released is called the battery capacity and the symbol used to identify this capacity is usually written as "C". The commonly used unit of measure is Amp Hours (Ah) for short.

Please see above a generic curve of different discharge rates of a Solar Lead-Crystal Battery at 25°C. For discharge values of a specific battery model we revert to the constant current discharge tables in the datasheet. 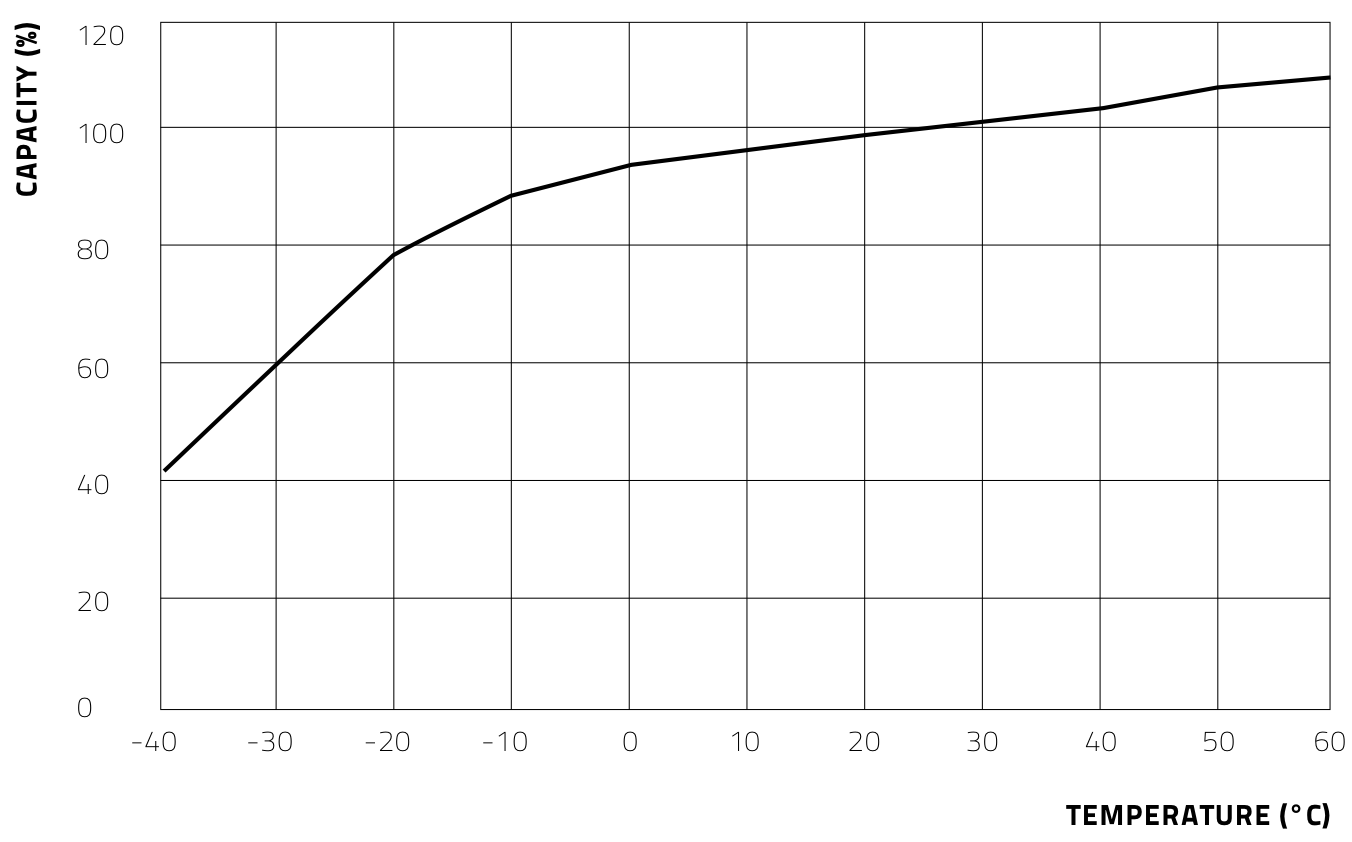 During long term operation at small discharge currents, the battery may form a thin layer of sulphation on the plates, increasing their size. This could cause deformation of the active material and can cause it to fall off the plates. To prevent this and to protect the battery during small current operations, the termination voltage should be set slightly higher as a result.

Over discharging below the termination voltage should be avoided since the over discharging could only gain a small amount of additional capacity, but drastically reduce the battery’s service life. 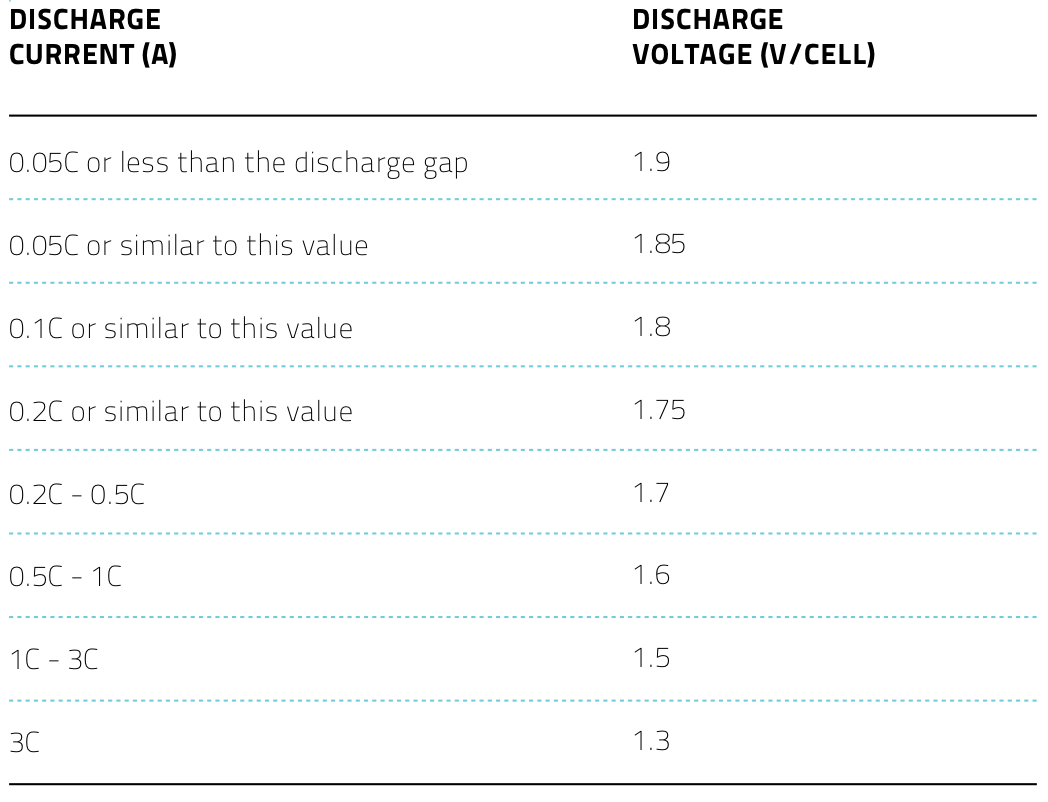 The self-discharge characteristics of a battery changes with environmental temperatures, the higher the temperature the higher the self-discharge, so the batteries should not be stored in an environment that is subjected to extremely high temperature conditions for long duration's of time. Due to the use of our unique crystal composite electrolyte and alloy grid plate technology, the self-discharge consumption of Solar Lead-Crystal Batteries is efficiently reduced. At a constant 25°C environmental temperature Solar Lead-Crystal Batteries can be kept on a shelf for up to 1.5 years without constant top up charging. The batteries will maintain around 80% of their rated capacity after 12 months of being stored.

Note: The following information above is GENERIC to Solar Lead-Crystal Battery Technology and is NOT specific to 1 particular brand, make or model lead crystalline technology battery.  We are not associated with Beta Batteries or trying to claim to be associated to Betta Batteries or there products, hence making this very clear here with this disclaimer.